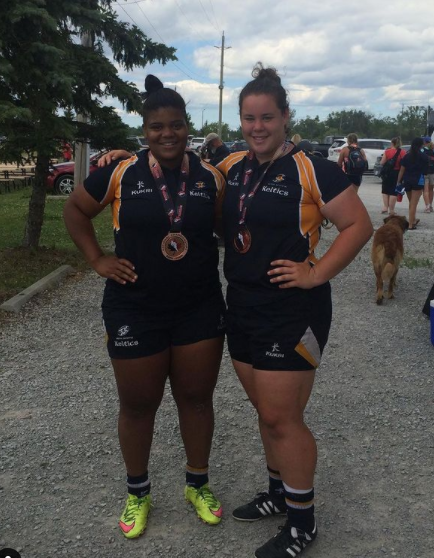 Although she is from Ajax, Ontario, Joanna Alphonso is not a new name on the rugby scene in Nova Scotia. Joanna completed her Bachelor of Arts degree and her Bachelor of Education degree at St.FX while playing for the X Women from 2014-2019. In her first year with the team, she was named Atlantic University Sport Rookie of the Year. In 2015, 2016 and 2017 Alphonso was named MVP of the league and in 2016 and 2017 was named to the USports First Team All-Stars. Joanna has also dawned the Nova Scotia Keltics jersey since her first tour with the team in 2016 where the Keltics brought home a national bronze medal with the U20 team. Another notable Keltics appearance was 3 years later in 2019 when Alphonso was able to help the Senior Keltics bring home a national silver medal. Joanna continues to be involved with high level rugby today as both a national team athlete and a coach with the St.FX X women. Along with her new role in coaching Joanna is a member of the first cohort in Canada to be involved in the Black Female Coach Mentorship Program, a pilot program ran by The Black Canadian Coaches Association and supported by the Coaching Association of Canada (CAC).

We caught up with Joanna to find out more about the new program and her time as a coach.

RNS:     We know that athlete who choose to stay in sport often have some ties to mentorship. Although in the past mentorship has been mainly informal, many sporting organizations have developed programming to formalize mentorship in efforts to support athletes and coaches. What made you want to get involved in mentorship?

Jo:        When the opportunity was presented to me, and with the climate that the world is currently in, I thought that it was the perfect time to help elevate Black females in sport especially in positions of leadership. There is not much representation of Black females in coaching positions and it’s important for women who look like me to see themselves represented in powerful and influential positions. I got involved as a mentor in the BFCMP to help empower Black females who may not feel like their voices are being heard or that they lack a community that supports their whole being.

Jo:        As a Black female, you have a unique and authentically different journey in this world.  The intersectionality of begin a female and being Black presents barriers that are very unique and sometimes difficult to navigate on your own. To be led by other Black women who can understand your exact journey is an empowering and intangible experience that enables Black women to see themselves reflected in those positions of leadership and know that they too can take on these leading roles and greatly impact their environments or communities.

RNS:     What do you hope to get out of this program yourself?

Jo:        I’m a huge believer in the “ripple effect”; someone teaches and guides me; I teach and guide someone else and they teach and guide another; that’s how change happens. I hope to inspire those that I mentor to take part in the ripple. I hope to expand the program so that the ripple effect can make a change in all parts of Canada for as many Black females in sport as possible. I hope to see young Black females want to take up more leadership and coaching positions in their communities and for them to know that they have support, foundations and resources through the BFCMP, to be and do the best they can in those roles.

RNS:     What do you hope the program accomplishes overall?

Jo:        I hope the program creates a sense of community for Black females in coaching. A community that Black female coaches navigating their own unique experiences can go to for authentic bonds through understanding, resources and support. I hope that through this program Black female Coaches feel confident with taking up space in places that are dominantly occupied by the majority.