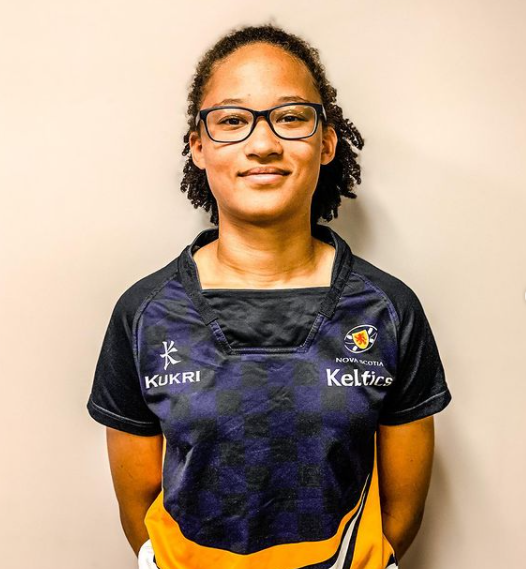 Mychael Paris, from Halifax NS, is a growing force in the sport of rugby. With only 2 years of playing under her belt she has already stacked up an impressive list of accomplishments. Mychael started playing with her high school team, Citadel High School in 2019 and that year took home the regional and provincial championships. In addition, Mychael was awarded Rookie of the Year! From there, Mychael was selected to the provincial U16 team. This team was able to claim the Championship title at the 2019 Atlantic tournament and go on to represent Nova Scotia at the National tournament. Mychael’s coaches rave about her natural ability in the contact area, stating that, for the position she plays she has no right to be making the amount of tackles she makes per game. It’s impressive and not only shows her skill ability but her work ethic on the field. Mychael is currently training all year long with Rugby NS staff as a high performance ignite athlete. Mychael hopes to one day earn a starting position on a university varsity team and eventually play for Team Canada.

Rugby NS caught up with Mychael to chat about her thoughts on the sport and the diversity within it.

MP: I first got started playing rugby with my high school team after a few of my friends in higher grades recommended I try out. One of the things that I like most about rugby is the camaraderie between teammates and even opposing players. Another thing is the intensity and energy in the game that’s not present in many other sports.

RNS: What do you think about diversity in rugby? What about representation of the Black community specifically?

MP: There’s actually quite a bit of diversity in rugby especially when I compare it to other sports I’ve played (hockey, swimming, etc). Of course, there is room for improvement, as there is in most places.

MP: One thing id personally like to see more of is Black players who move into coaching roles and mentors but with that being said, I’ve always felt very welcomed and supported in the rugby community. Another thing I think would help would be better advertising within the Black community and more advertising in general.

RNS: If you could give one piece of advice to someone thinking about playing rugby, what would it be?

MP: My advice for any younger players or any people at all wanting to play rugby is to not be intimidated or shy while playing because more likely than not, you’re not the only one new to the sport. And even if you are everyone will be more than willing to help you learn. It’s more enjoyable for if you put in 100% effort all the time even if you’re a little confused.