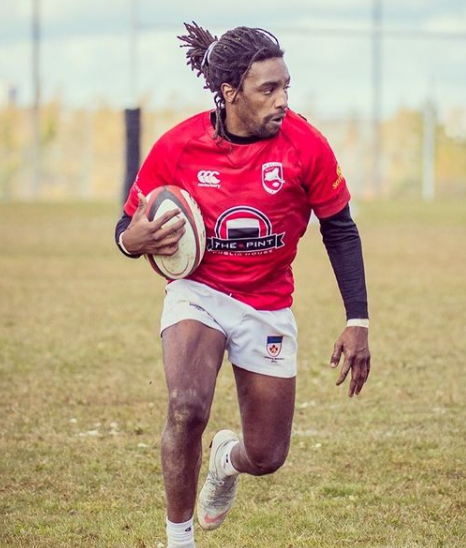 Rugby Nova Scotia is excited to introduce our next "Spotlight On" highlight, Tafari Cole!

Tafari, also known to his teammates as TJ, is of Canadian-Jamaican heritage and as luck would have it TJ's first international try was scored while playing with his previous rugby league club, the Brantford Broncos in a friendly against the Jamaican National team!

Other note worthy accomplishments from Cole include:

Provincial Player in both Rugby Union and Rugby League

With an impressive list of rugby accolades TJ hopes to continue to add to his list, stating, "Hopefully I’ll be adding Keltics Blue to that list by the end of the year!"

Rugby NS chatted with TJ about his journey in rugby and how he perceives the diversity within the sport.

RNS: What got you interested in rugby and why do you continue to be involved?

TC: Back in high school a friend approached me saying he wanted to get a rugby team started at our school. We watched Invictus together followed by some all-blacks, springboks and England highlights and I was sold on the sport from that day.

What drives me to be so active within all aspects of the sport is just seeing the positive growth and knowing what rugby can and does give back. You’d be crazy to not love the rugby culture!

RNS: What do you think about diversity in rugby?

TC: I love it! Rugby allows literally everyone and I mean everyone regardless or age, race or gender to be included and feel as if you’re apart of a family or community.

RNS: What about representation of the Black community specifically?

TC: I believe it’s fair to say there’s a great showing of Black rugby players both male and female on the world stage.

There’s actually an elite travel rugby team called ROOTS Rugby Family who recruit black rugby players from all over the world to compete in tournaments. That right there I believe is a massive accomplishment from the black rugby community. I feel it shows how accepted we feel in the rugby community which at one time was a sport you wouldn’t see many black athletes in.

TC: I’d love to see more people like myself in the high schools and youth programs. Growing up for I noticed that the diversity among coaching staffs and schools really did something for the black youth.

TC: Yeah! I can’t wait to get back on the pitch after the crazy year we’ve all had. Hope everyone’s been preparing for a 15s comeback cause I know I’m ready!